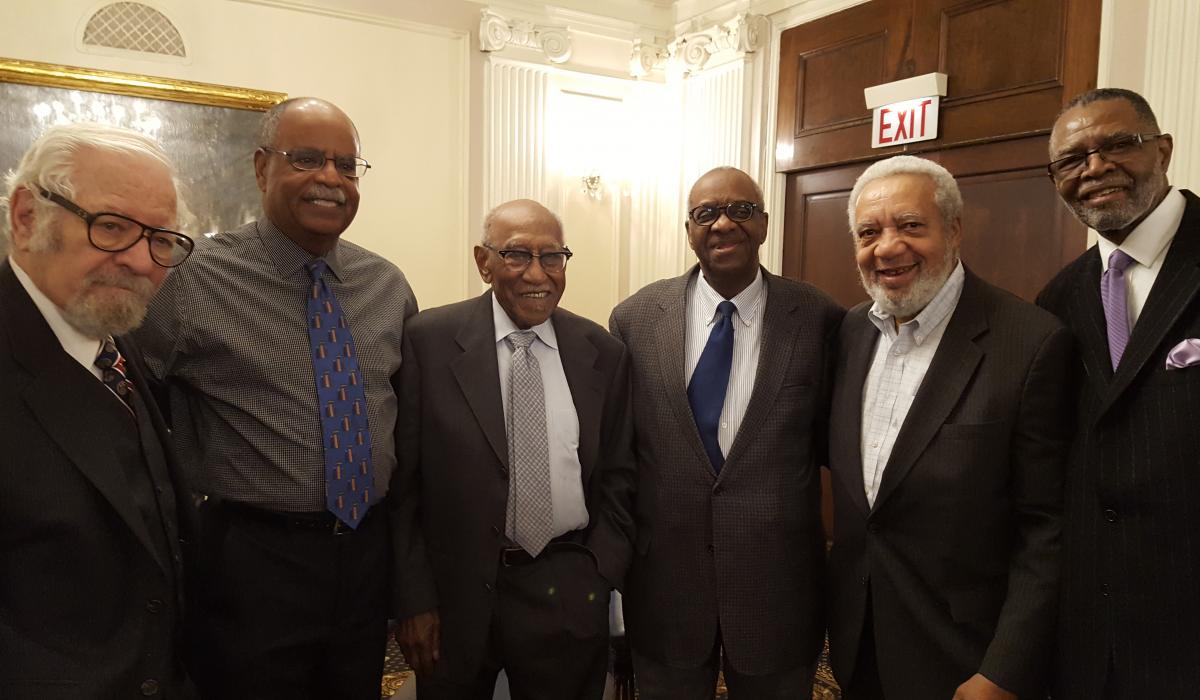 On Wednesday evening, May 10, 2017, Black Chicago History Forum's Emeritus Chair, Timuel Black engaged in a conversation about his 97 years of life and activism in Chicago. He was the guest of the Public Affairs Committee of the prestigious Union League Club of Chicago. Black held the audience spellbound with accounts of his experiences in education, military service during WW2, civic and community activism, and political advocacy. Recognized throughout the city as an exemplary citizen and somewhat of a Renaissance man, Timuel Black inspired as he enlightened. Likewise, Black has continued in his role as a consultant for the NEH project, "Social Origins of Chicago's New Negro Artists and Intellectuals, 1893-1930," rendering valuable evaluative information on past intellectuals and their contributions to American life and culture.

Over a two-day period, May 12th and 13th, past Forum president, now emeritus president, Dr. Darlene Clark Hine of Northwestern University, was honored for her work in promoting Black Women's history. A pioneer in this emerging subfield of African American and American history, Hine has been recognized by the nation as former president Barack Obama bestowed upon her the National Humanities Medal in 2013. Hine's prolific writings number over 20 publications, published by major presses. Hine's contributions to academic and intellectual life continues as she prepares the Forward to the anthology, Root, Branch and Blossom, being prepared for review with the University of Illinois Press this year. This effort is part of the NEH project, "Social Origins of Chicago's New Negro Artists and Intellectuals, 1893-1930."

As part of the on-going activities of the NEH project, "Social Origins of Chicago's New Negro Artists and Intellectuals, 1893-1930," the Black Chicago History Forum is collaborating with various individuals and groups, both academic and lay, to complete a comprehensive data base as part of this website by the end of the year. Information on such local luminaries as Fannie Barrier Williams, Ida B. Wells-Barnett, Charles E. Bentley, Richard T. Greener, George Washington Ellis, Dewey R. Jones, Frederick H.H. Robb, Dr. M.A. Majors and others is still being researched and processed for public presentation.

The Black Chicago History Forum continues to offer an end-of-the-month session on the history of Black Chicago at the Du Sable Museum of African American History which is open to the public as an example of its commitment to expanding an appreciation of the humanities beyond the boundaries of the academy. The major lecturers are Drs. Christopher R. Reed, emeritus professor of history at Roosevelt University and Lionel Kimble, Jr., associate professor of history at Chicago State University.  PowerPoint presentations and handouts eliciting periodic responses are utilized as well as a means of facilitating increased audience participation.

In June and July, BCH Forum will be sponsoring multiple book signings of the paperback reprint of Black Chicago's First Century University of Missouri Press).